An Ashram at Wishram

Notes scatter from
the bell at the top of the door.
She looks up from her book
to see him cowed as if
the notes were shards
of glass and he a hemophiliac.

“Close the door,” she smiles and closes her
book without marking her place.
The wind from the river across the tracks stops, but
the notes respill into the room.
He tries to hide it, but she sees, again,
the wince that happens a hundred times a day as
the rocks from the track bed stab his feet through
the thin soles of his worn engineer boots and
the cinders plague his eyes and
the wind cuts his neck where
the jacket won’t close.

He blinks slowly as she shows him,
up stairs that creak, to
the bull pen where
the men sleep and
the radiator clicks and sighs.
“Donations are helpful, but not required,” she says
and watches him begin to sag as
the warmth finds him.
“Thank you,” he says and marvels at
the ceiling rafters arching above.
He drops his duffel next to
the cot and sits, surrendering to
the building’s blanket-strewn hug.

She watches him for a moment,
smiles, and goes back down
the stairs, not making a sound, to
the dog-eared book that she
ruffles with affection. She knows
the light is always on and can be seen
even from the other side
of the broad dark river. 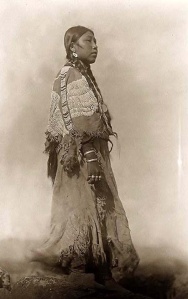 (A Wishram woman, pinned from old-picture.com)

Writer at Butt in Chair
View all posts by Jim Stewart →
This entry was posted in Poem, Reprint and tagged home, homeless, lost and found, poetry, river. Bookmark the permalink.